Screams. The distant sound of crackling flames. Acrid smoke crawling through the night, twisting down your throat and burning your lungs.

This was the terror you ran from. The nightmare that still wakes you in the darkness, leaving you gasping for breath. Like so many nights before, you force your eyes open. Tonight though, instead of vanishing, the flames leap into vivid technicolour.

The camp has finally become the true representation of what people living there have known for months – Hell on Earth. 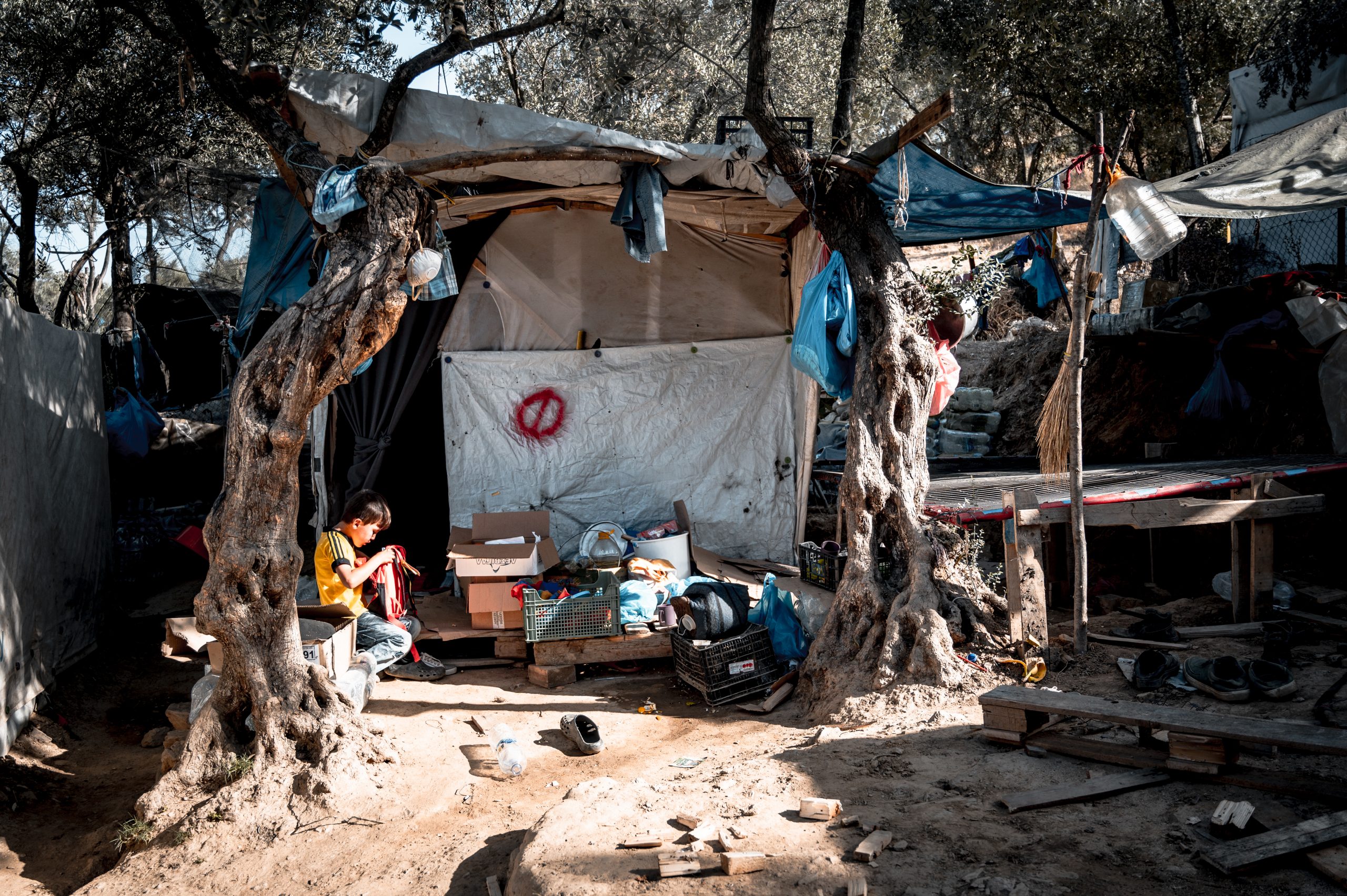 Why does Moria Refugee Camp exist?

Europe has long represented something of a promised land for people fleeing warzones and home countries where they face persecution. Much of Europe enjoys freedoms and political stability that much of the world can only wonder at. People risk everything, including their lives, for the chance at a new start in Europe.

Due to their geographical location on the fringes of the European Union, countries like Greece, Italy, Malta and Spain are the point of landing for many refugees escaping to Europe. Greece, with its proximity to Turkey (itself a hot-spot for refugees of the Syrian civil war), receives a huge number of refugees every year via the Mediterranean.

Moria was built in 2013, just before the height of Europe’s refugee crisis, to house around 3,000 refugees. In March 2016, as part of a controversial deal between Turkey and the EU, the Greek Government agreed to confine refugees and migrants to five islands whilst their claims were processed.

Moria itself is geographically closer to Turkey than mainland Greece, but the sea crossing still poses a significant threat to those who attempt it. Moria was billed by the EU as a place to register refugees before distributing them across the bloc. It has, instead, become little more than a detention centre for the thousands who continue to live there. 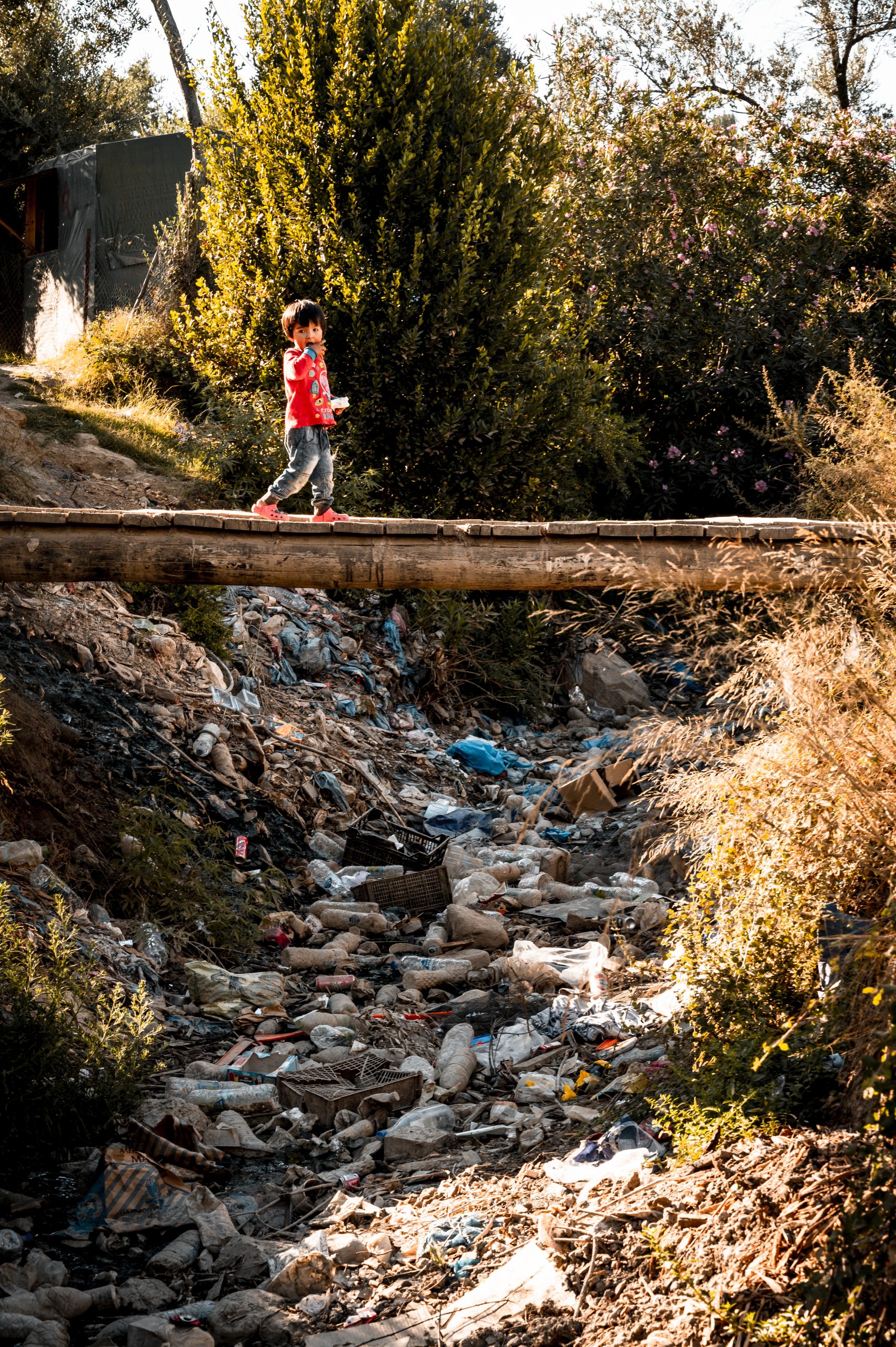 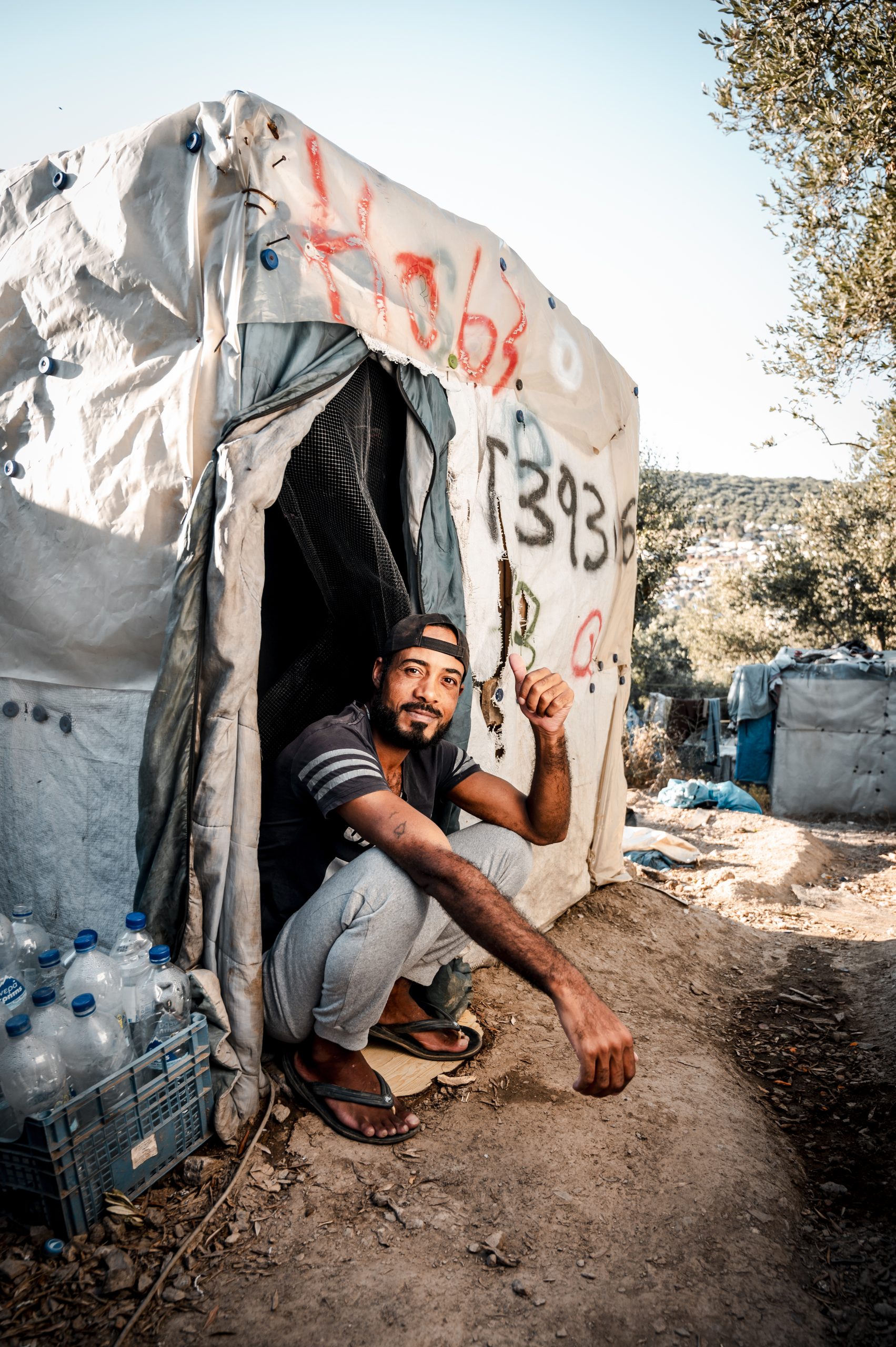 Who lives at Moria Camp?

In late 2019 about 70% of people living in Moria were Afghan nationals, although about 70 nationalities are represented there. 45% of the people who were living in Moria are children – many of them unaccompanied or separated from their families. The combination of past trauma and the ongoing living conditions that they’re subjected to is causing a mental health crisis amongst children in the camp. 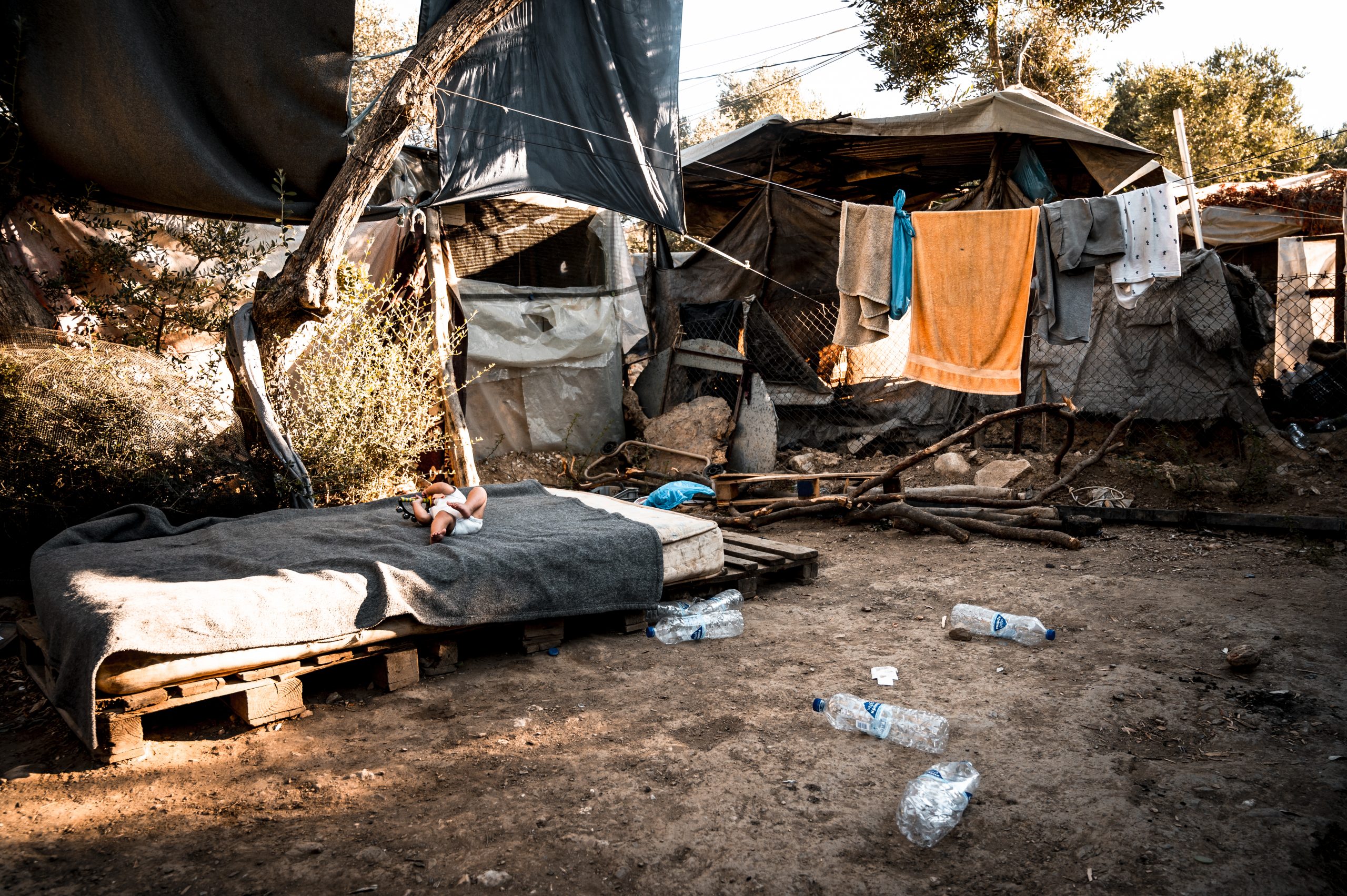 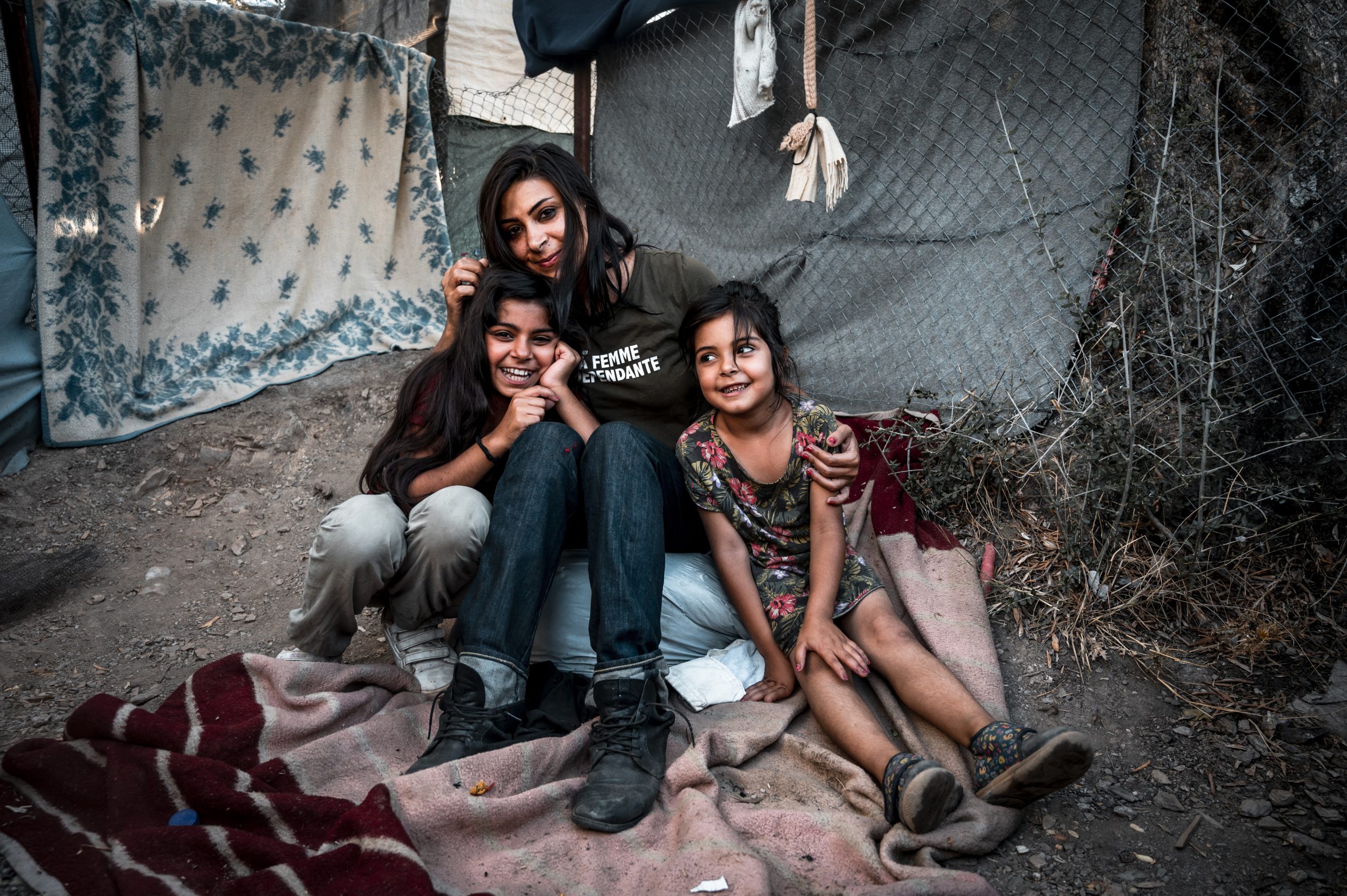 How long do people live in Moria Camp and what is it like?

Perhaps the best way to answer this is with stories from the refugees themselves.

The first is a Syrian family who has now been in Moria for 10 months. The father worked in Germany for two years and speaks German well. Due to the ongoing war in Syria, he made the decision to leave Germany to collect his family, fearing for their safety if they stayed. On returning to Europe, the family ended up in Moria. They have now been banned twice from travelling to Athens because, according to Greek authorities, Syria is safe to return to.

Their living space is a few pallets with a cloth around it, and a snake has recently started living under it, coming into their “home” at night. Their 7-year old son asked if he could carry a knife to defend himself against attacks. In this tent, with his wife, 4 children and a newborn, is a man who just wants to work.

Instead, he stands in line for three hours a day with his family to get food. His debit card and the identification cards of the family have been taken by the Greek Government. His family, who he dreamed of providing for, is left with nothing.

Nearby lives a boy from Iraq. His father was killed by ISIS, his brother went into the army before disappearing, and his mother died after a prolonged illness. Living in constant fear of being conscripted by either the army or ISIS, he fled. Alone, he made it to Turkey’s coast, and onto a boat destined for Lesvos.

The boat was flimsy, not made for the dangerous crossing, and it sank. Holding onto his backpack, lifejacket and a car tyre, he listened to the crash of the waves and the sounds of screaming. People couldn’t swim. Most had no lifejackets. Many drowned. Adults. Children. The sea doesn’t discriminate.

After what seemed like an eternity struggling in the water, help came. On Lesvos, at the doors of Moria that he had risked so much to reach, he was told there was no room for him. On a mat under an open sky, amongst a mass of bodies and the rustling of snakes, he tried to sleep.

Other refugees showed him where to find pieces of cloth to make his own tent. Winter rain soaked through the walls, storms brought crashing thunder and lightning. Once again he lived in fear of drowning, but this time on the land itself. Spring was a brief respite, but it soon gave way to the blistering heat of summer. The winter storms are on the horizon once again and still, he lives here in this makeshift tent, no end in sight.

Life in Moria is harsh. There isn’t enough shelter, and what’s there is often inadequate for the weather. Electricity is unreliable and only available in certain areas of the camp. There aren’t enough toilets. Piles of garbage build up in the streets. This isn’t a place of refuge. 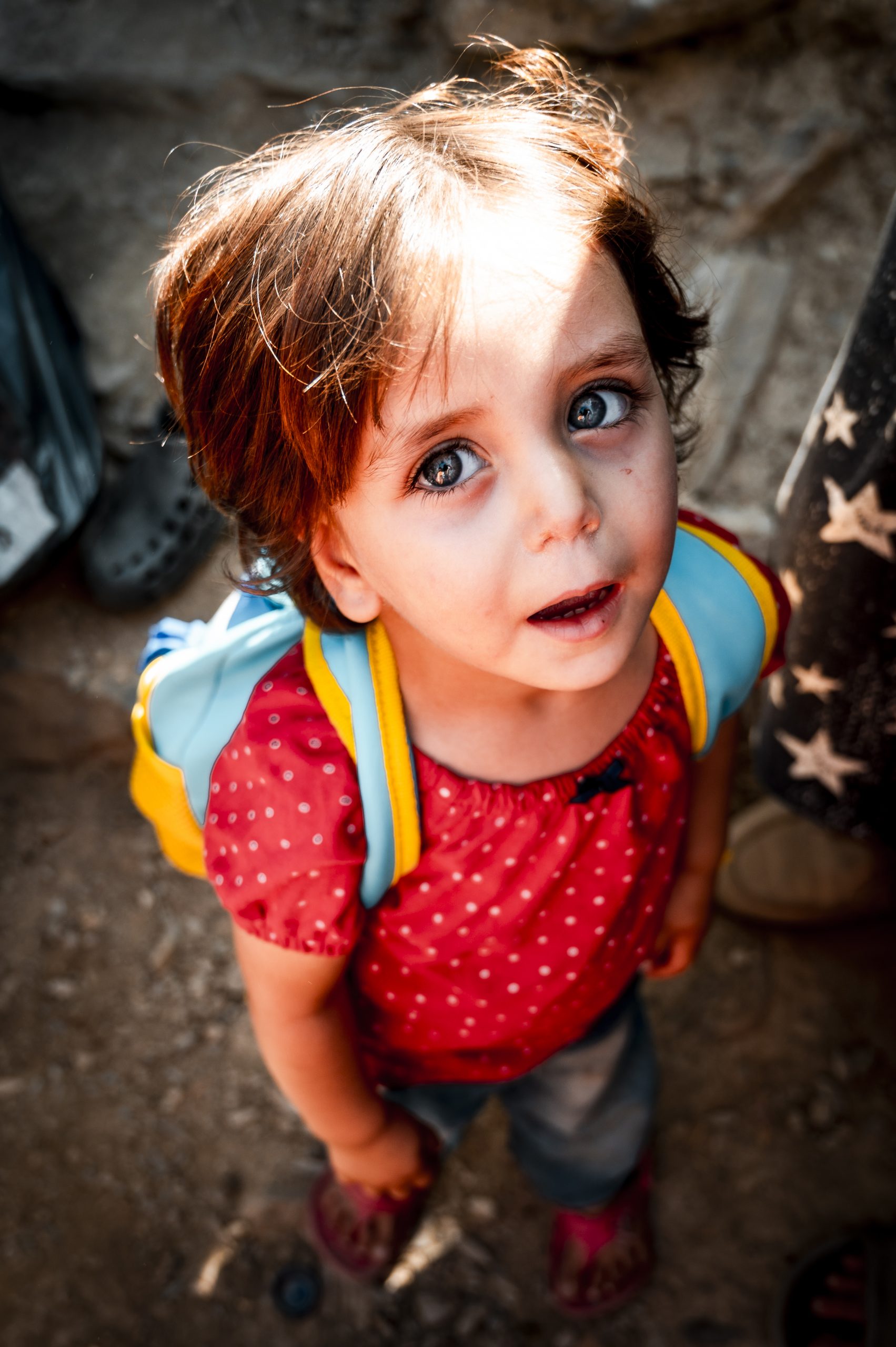 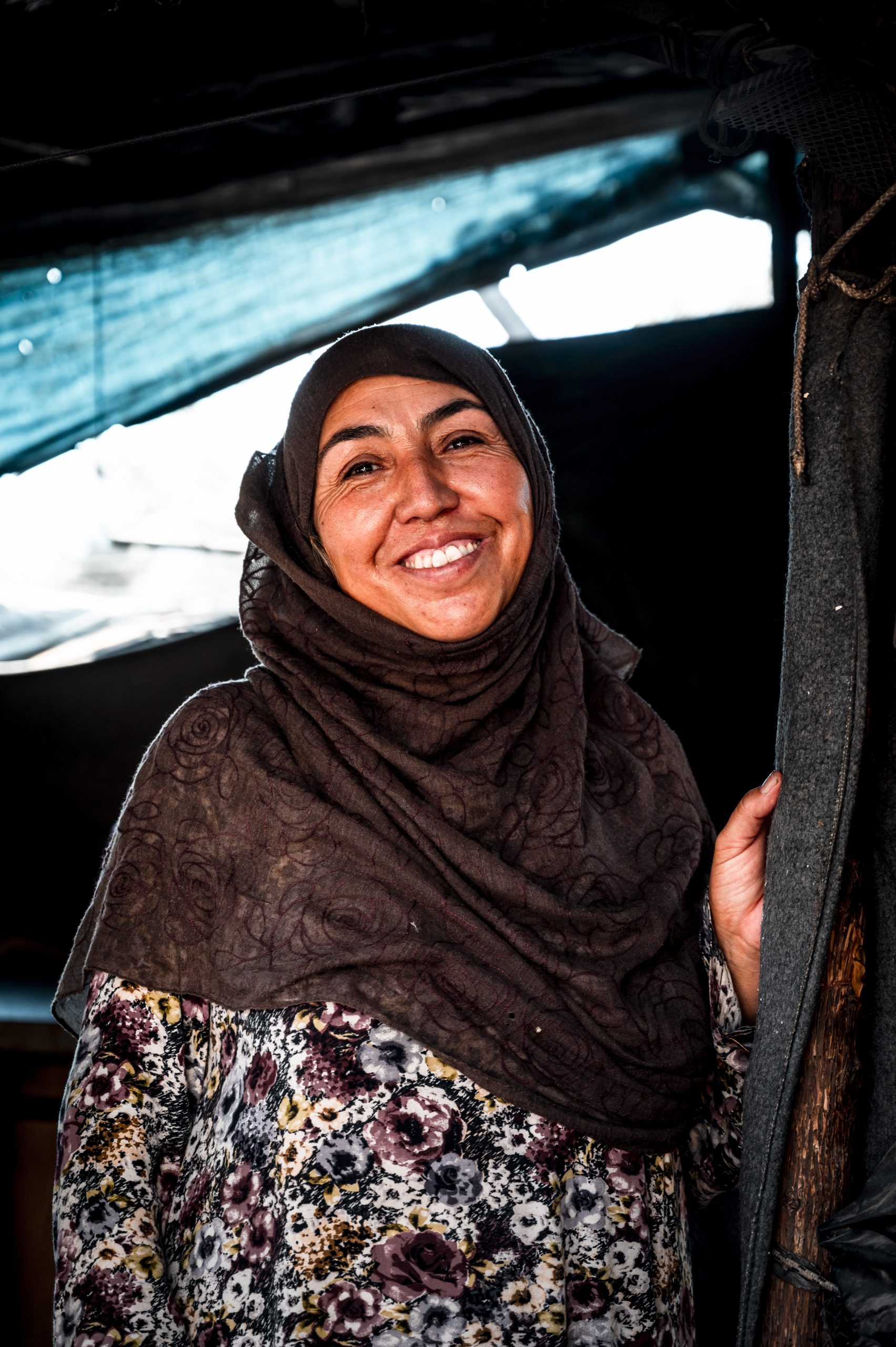 How did Moria Camp burn down?

On the night of September 8 2020, several fires started throughout Moria. Arson was immediately suspected, with some accusing locals of starting the fires to rid themselves of the refugees on Lesvos. Since then, police have charged four Afghans from the camp who now stand accused of setting the fires.

Moria has long been troubled by violent unrest. Multiple NGOs have condemned the living conditions there for years, warning that a situation such as this was almost inevitable. 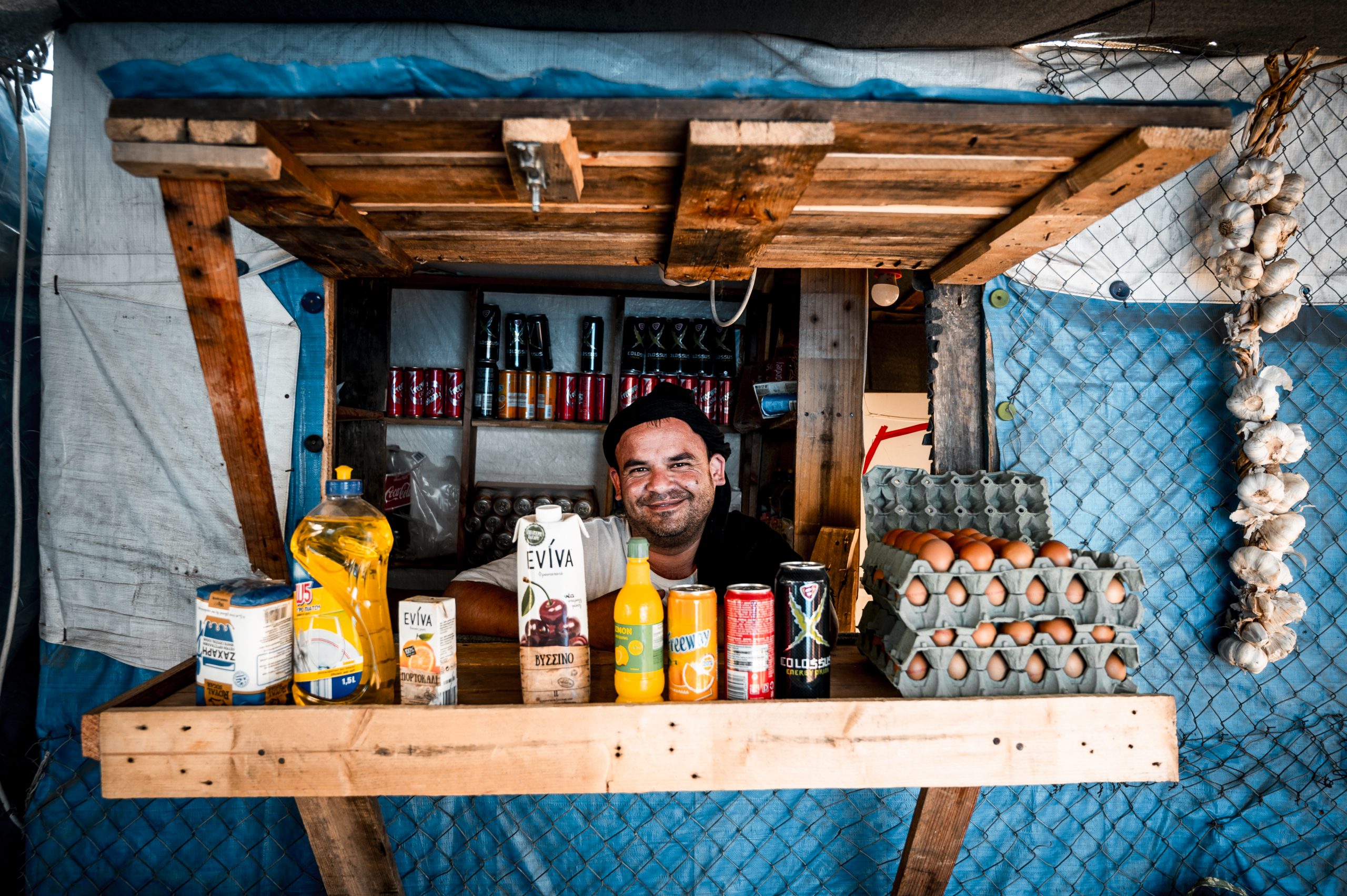 How do the local people on Lesvos feel about the refugees?

Back in 2015, as European Governments were struggling to know how to manage the huge influx of refugees, local people stepped up. On Lesvos, they created their own reception site for asylum seekers. Local authorities contacted international NGOs and created a safe space which has never operated overcapacity.

However, Greece has been in the grips of an economic crisis for years, resulting in a loss of jobs, and lack of funds to support the infrastructure required for an influx of thousands. Popular tourism hotspots on the islands saw a loss of income due to a perception that entire islands were now refugee camps.

Locals living on the island talk about having to take detours to avoid violence in and around the camp or roadblocks erected by other locals. People living near the camp speak of being afraid, but also point fingers at the EU, saying that they “give us money to build a prison here for the refugees but doesn’t solve their wars.”

In November 2017, Lesbos Mayor Spyros Galinos had warned that the island and other border areas could be turning into “concentration camps, where all human dignity is denied”.

The Aegean Islands, of which Lesvos is one, are home to around 500,000 people. They now host almost 43,000 refugees. With the inhumane conditions in many camps, it’s little surprise that some residents feel that their islands are being turned into prisons for the refugees. Plans to build more permanent “closed detention sites” on Lesvos in February of this year were met with demonstrations and blockades.

With the overcrowding, people moved into nearby olive groves. The lack of basic shelter and warmth led to people cutting down trees to burn for warmth. This, inevitably, causes tensions with local farmers who rely on the olives for their income in already difficult economic times. 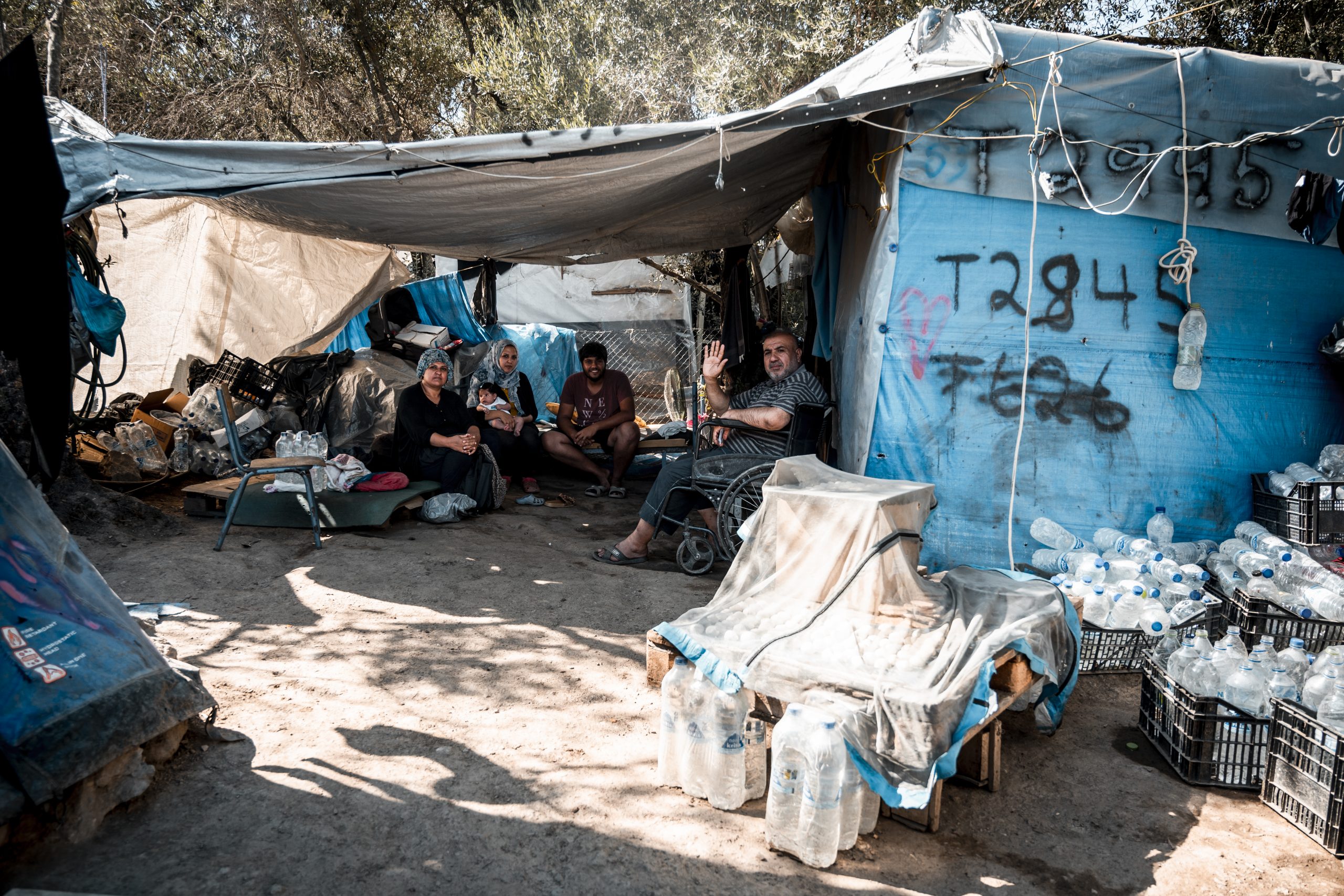 What happens to the refugees now that Moria doesn’t exist?

In what is something of a miracle, nobody seems to have been injured during the fires at the camp. Almost 13,000 people are now without shelter as the summer in Greece draws to a close.

The solution on Lesvos has been to move people into a temporary refugee camp, erected on an old military shooting range scattered with old weapons and ammunition. Conditions in Moria were dire, but this new camp lacks even the basic amenities that people had become used to managing with. Meals are given out just once a day, and tents lack mattresses or blankets for sleeping.

People are sleeping on the side of the road with what little they could grab as the fires raged. For some, that was nothing more than the clothes they were wearing. And now, in the midst of a global pandemic, they face an outbreak of COVID-19. 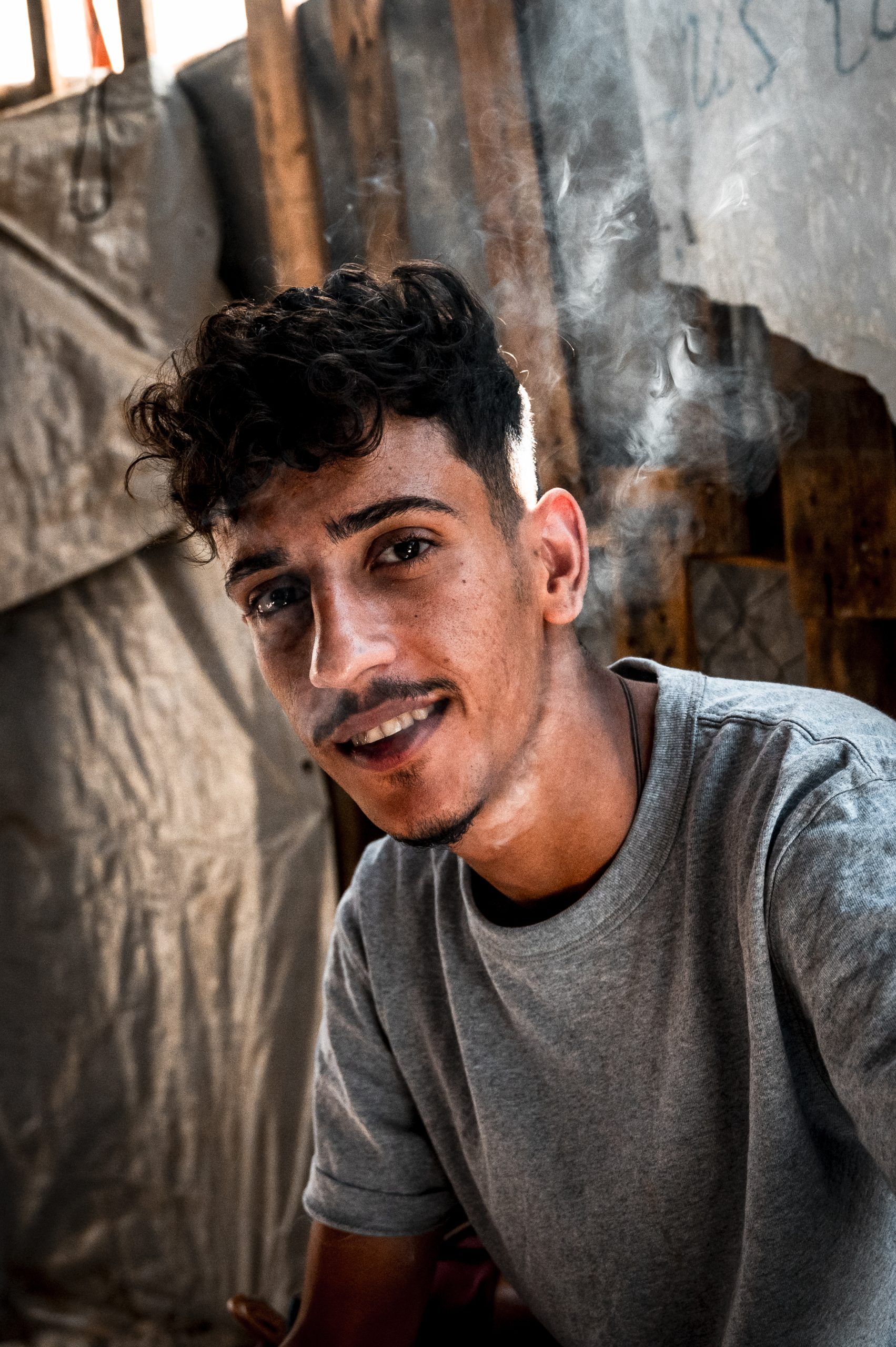 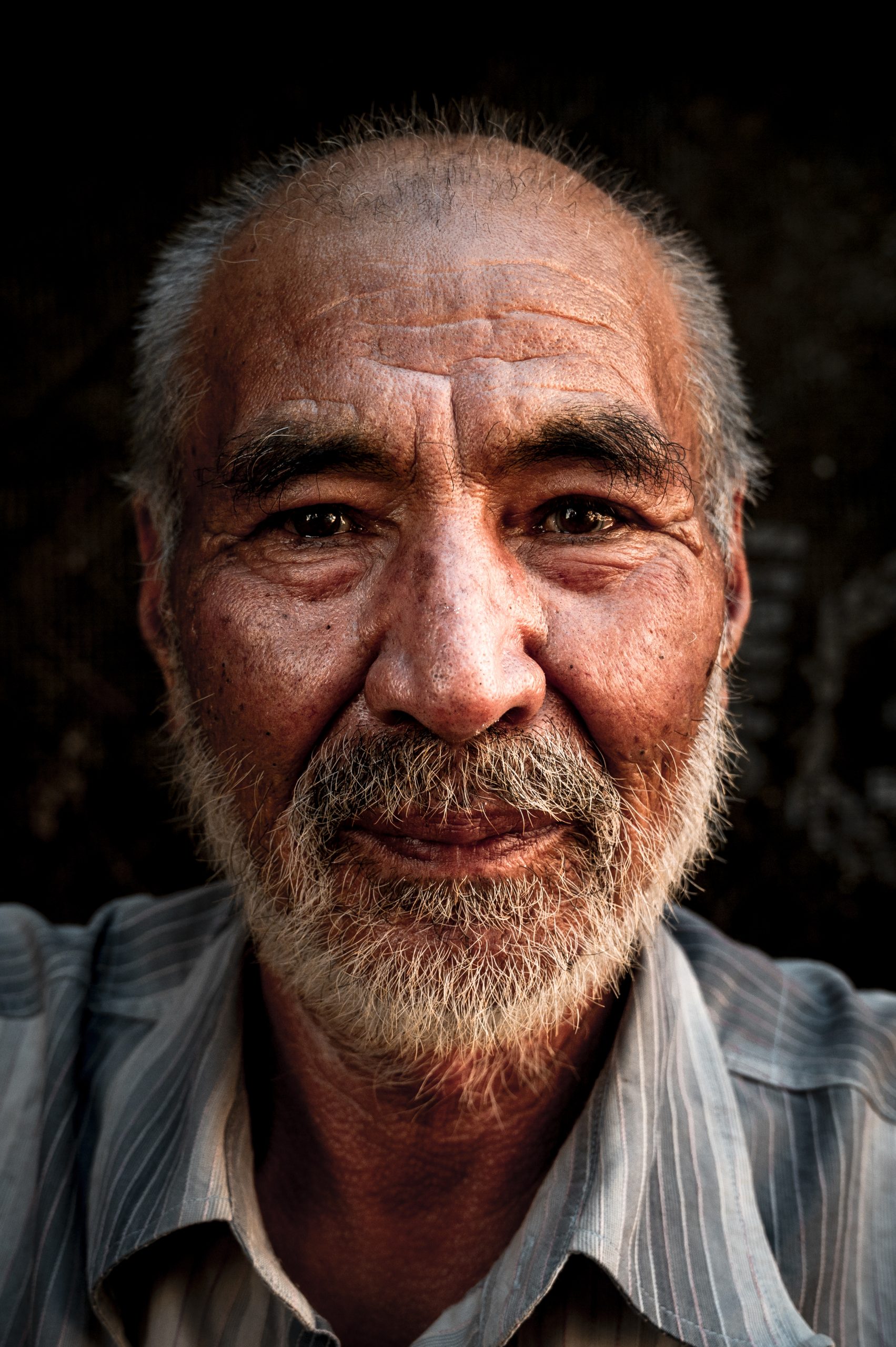 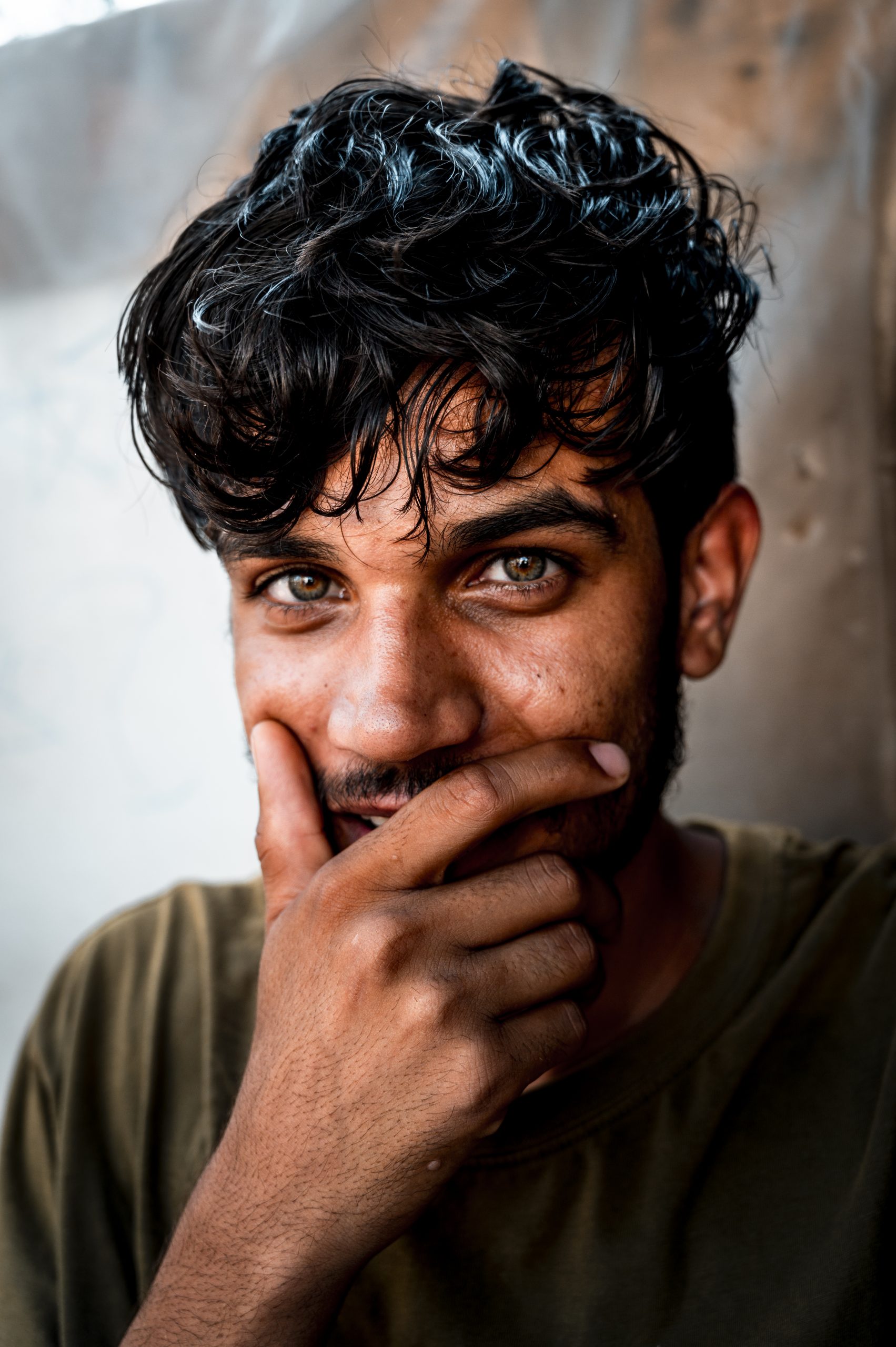 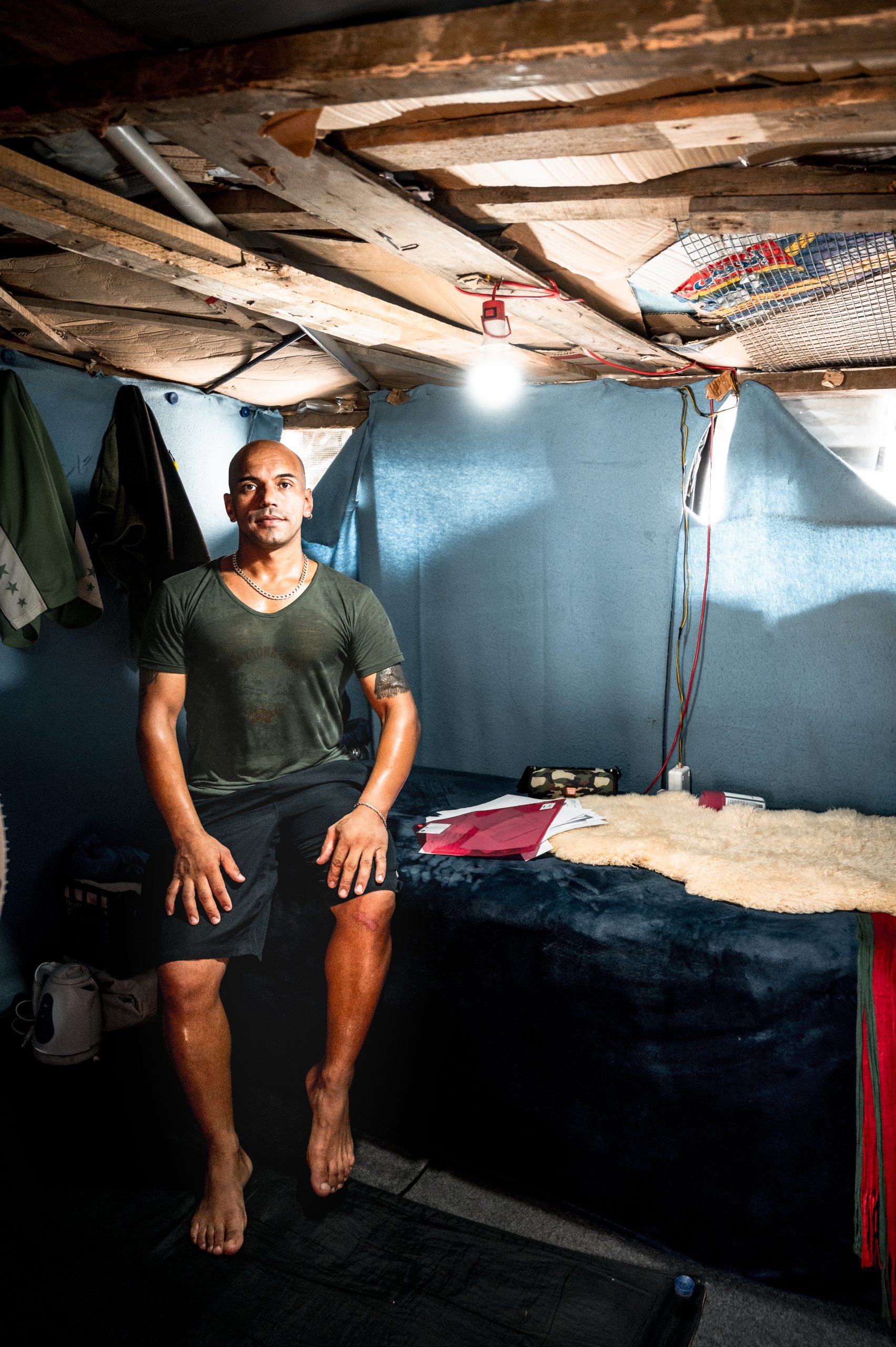 What has Europe’s response been?

Many NGOs have suggested that the destruction of Moria was an inevitable consequence of the ongoing mistreatment of refugees trying to seek asylum in Europe. Although 400 unaccompanied children have now been relocated to the Greek mainland, this represents a tiny proportion of the thousands of people who remain on the islands.

With policies aimed at keeping refugees in Turkey and Libya, as well as a lack of action against member states who continue to defy EU mandates, it seems that this new crisis will change little. Whilst some people succeed against all odds, the rise of nationalist parties across Europe along with increasing anti-migrant rhetoric paints a bleak future for those hoping for a new start. 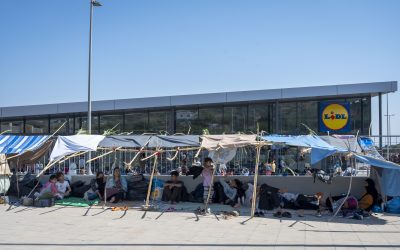 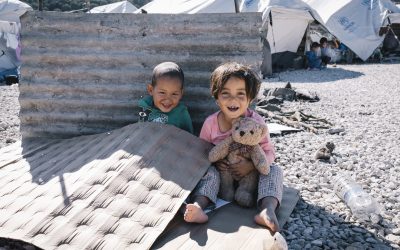 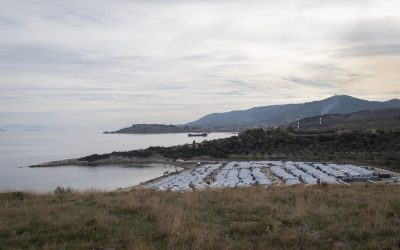